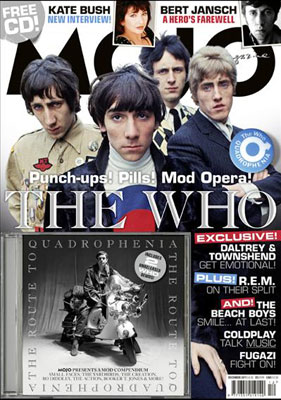 Just to keep a theme going, big thanks to Jason for flagging up the latest edition of Mojo magazine, which has a Quadrophenia theme.

We suspect it's probably tied into the release of Quadrophenia on Blu-ray (see earlier post) and the reissue of the album as a box set (also featured previously), with an interview with Roger Daltrey and Pete Townshend, which is likely to be worth a read if you are a fan of either. There's also a piece on the 'album's legacy'.

On top of that, there's a themed CD, described as a 'mod compendium', including music from the likes of Small Faces, The Yardbirds, The Creation, Bo Diddley, The Action, Booker T. Jones and so on. I've not seen the tracklisting, but suspect it's the 'same old'. A decent introduction to some well-worn tunes I would guess.

Anyway, go read it in your lunch hour in your local WH Smiths if you don't fancy paying out the best part of £5.