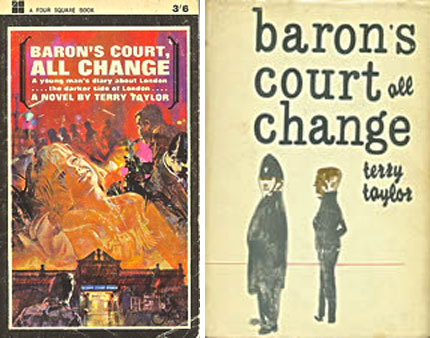 Big thanks to Paul Stevenson for flagging up the reissue of a book I’ve been chasing for a long time, but so far, a copy of Barons Court All Change by Terry Taylor has eluded me for a reasonable price. Not for much longer though, as the book will be reissued in November this year via Five Leaves Publications. Rather than me paraphrasing, I’ll copy what Paul sent across.

‘An early heads up on this one. Due to be re-printed in November by Five Leaves Publications is Terry Taylor’s Barons Court All Change. First published in 1961 this Beatnik/Mod crossover book revolves around the main character’s escape from suburbia for a world of sharp suits, jazz, drugs and esoteric beliefs. It also has the distinction for containing the first fictional reference to LSD in a British novel.

It should be interesting, from a mod-centric point of view, as the author was reportedly the inspiration for the unnamed narrator in Colin MacInnes’ Absolute Beginners. Long out of print and going for a fortune whenever it appears this book could be worth a look when it gets published at the end of the year.

Not much is known, or available, about Terry Taylor. The only place where I have read anything about his life is in Andy Roberts’ Albion Dreaming: A popular history of LSD in Britain, and that was fairly eyebrow-raising. He appears to have been the perfect embodiment of the sixties, going from London hipster to Chelsea occultist via Tangier, all within a few short years. Surely a great subject for a biography, and a good reason for believing that Barons Court All Change, might indeed be a bit special.

As for the literary quality of the novel, it is more talked about than read, and hardly anybody talks about. It does have a reputation as being ‘The Holy Grail’ of beatnik and mod fiction, whether it lives up to this or not will be interesting. Even if it doesn’t the chances are that it will offer a fascinating insight into a murky part of London’s secret life at the dawn of the Sixties.

For me personally I have been waiting for an age for this to get a reprint and I’m hoping that from the descriptions I’ve read of it that it will be the literary equivalent of one of the BFI’s Flipside releases. Although this being only the third edition in fifty years tends to suggest that it could go either way. At least it won’t cost 200 quid to find out.

Barons Court All Change will be published by Five Leaves Publications in November 2011 and is available on Amazon to pre-order for 8.99.’

Update: The book has now been reissued. You can find out about it here.